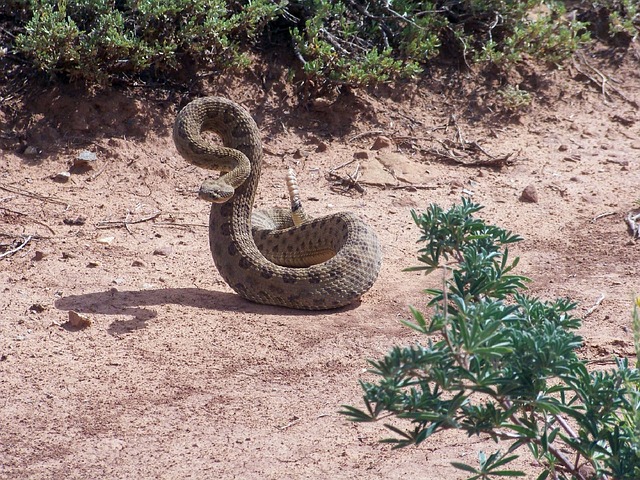 He was lost in the desert, dehydrating and hungry.

Cacti was tempting with their water reserve, but the thorns were so tough!

He was about to give up when he came across a baby cactus with small thorns, that would pierce his skin just lightly.

With his thirst finally quenched, he walked onward until he found a rattlesnake.

Snakes were his most dreaded animal – hideous, scary things!

The viper was on him, looking intensely, about to pounce.

Heart racing, he was faster and before she closed her fangs onto his skin, he grabbed her and had a bite, satisfying his hunger.

He was now the Snake Eater… 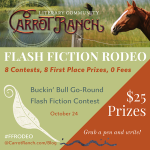 This post was written for the Flash Fiction Rodeo Contest #6.

To enter the contest this week we had to do it in 2 steps. First, we had a couple of days to sign up to it. Then, a 2-word name of a bucking bull would be drawn for each contestant, which would then have another couple of days to come up with a 107-word 8-sentence history that included the 2 words of the bull’s name. And the theme was to be a fictional story about someone facing a challenge or a fear.

I liked the title of my bull and decided to keep the words together in the same order, so I created a story to go around it. 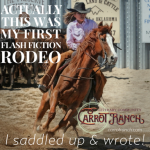 She was born in a flower pot at the city. Too much noise, too few flowers.

So, off she flew, away from the city.

But all she found was a desert.

She felt hungry, thirsty and afraid, and started to regret leaving the comfortable city.

Then, she sees a flowering succulent bush. She goes for it and finds the most delicious, thirst-quenching and satisfying meal.

She also finds cover, amongst leaves as pale as her wings.

Her own private Butterfly Heaven!

This post was originally written with 143 words, for a Flash Fiction for Aspiring Writers almost a year ago, and inspired by a picture of a pale winged butterfly on a succulent bush, by TJ Paris.

Then earlier this week, as I saw the Flash Fiction Challenge of the Carrot Ranch, with a prompt of a desert surprise, I couldn’t help remembering my little butterfly.

So instead of creating a new story, I took the extra challende proposed by Charli to try and reduce the size of my original story to 99 words, so it would fit the Flash Fiction Challenge requirements.

So this now it the results of this reducing effort.

She was born in a flower pot at the city. She didn’t like it there much, though. Too much noise, too few flowers.

So, off she flew, away from the city. But the city was in an arid area and all she found was a desert.

She felt hungry, thirsty and afraid, and started to regret leaving the comfortable city.

Then, suddenly, she sees a flowering succulent bush covering a huge ground area. She goes for it and finds the most delicious, thirst-quenching and satisfying meal. Much better than what she used to get in her luscious colorful flowers at her pot.

She also finds cover from predators, amongst the thick leaves as pale as her wings.

She has found her own private Butterfly Heaven!

This post was written in response to the Flash Fiction for Aspiring Writers, that this week features a picture by T.J. Paris.

To see other stories inspired by the same picture, click the blue frog below.

I admit being guilty…

The most refined skills of color printing, the intricate techniques of wide-angle photography, provide us pictures of trivia bigger and more real than life. We forget that we see trivia and notice only that the reproduction is so good. Man fulfils his dream and by photographic magic produces a precise image of the Grand Canyon. The result is not that he adores nature or beauty the more. Instead he adores his camera — and himself. 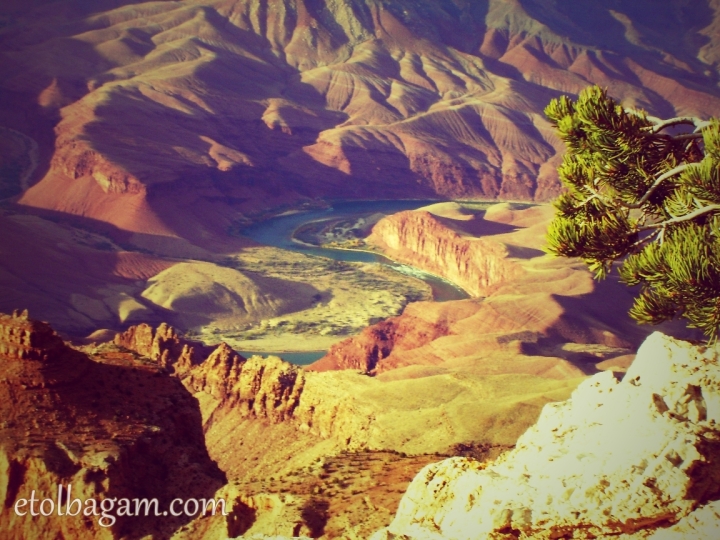 Although, I do adore nature or beauty… 😉

Today a friend from work came back from vacations. Her brother came to visit her and they decided to go on a 2-week road trip, leaving from Redmond, Washington, going down all the way to Los Angeles, California, then from there to the Grand Canyon, Arizona, then Yellowstone, ID,MT,WY, and back from there.

As usual, upon coming back to the office she brought some local treats from her trip. There was some candy, which is something I usually don’t like and barely have.

And there was some desert food.

Not cactus. That’s easy and she wanted something different and challenging.

So she went for protein sources: 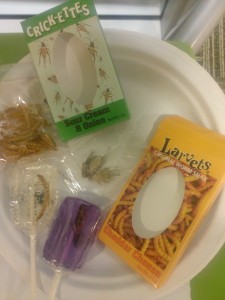 I’m the kind of person who likes to try everything.

So I went for the larvae very easily, since they look a bit like those tiny rice crackers anyways.

Tastes like nothing, though. Not even the promised cheddar actually.

For the crickets I was not so sure.

I know it couldn’t be worse than the larvae, but just the fact that they were there in whole with legs and eyes and everything was a bit intimidating.

Yeah, yeah, I do eat cows and pigs and chicken and fish and sometimes some lamb. But except for the fish, it’s not common for those to be whole in my plate and looking at me.

And eating fish is so culturally accepted to me, that it does not feel intimidating.

So I know my problem with the crickets was more psychological than anything else.

I really wanted to try it, but had to do some psychological work on myself first.

Then came OG, all open minded and went directly to the crickets.

That was what I needed. I took one too and we both tried at the same time.

She even took a picture of us a moment before we started chewing on the thingy.

And you know what?

Much better than the larvae actually.

When I sent the picture to my husband, though, he replied back saying it was gross. I guess tonight will be a no-kiss night… hahaha