It was their Senior year in high school.

Prom night was coming and that’s when they were planning to give themselves to each other in full.

The chosen place was a treehouse at the backyard of an abandoned house.

Although shabby on the outside, the inside looked like a fairytale.

He lays her down gently at the mattress.

When things start to get hot, he remembers he forgot the condoms at the car.

He goes to the car, opens the glove compartment, and presses the button of a little remote control.

Amongst shrapnel and wood chips, she rains around him in bits and pieces of flesh and blood.

This post was written for the Flash Fiction Rodeo Contest #7.

The rules for contest for this week it to “write a flash fiction in 109 words, no more, no less and weave a murderous vibe through an every-day setting, either in thought or deed.”

The image that came to my mind as inspiration was the last one in the story, then I wrote a story around it to fit. Originally I thought it would be a 299 word story, which allowed me to add many more details. Those details are gone, but I guess the shorter version ended up pretty nice too.

The winner for this contest was announced today at the Carrot Ranch.

He was lost in the desert, dehydrating and hungry.

Cacti was tempting with their water reserve, but the thorns were so tough!

He was about to give up when he came across a baby cactus with small thorns, that would pierce his skin just lightly.

With his thirst finally quenched, he walked onward until he found a rattlesnake.

Snakes were his most dreaded animal – hideous, scary things!

The viper was on him, looking intensely, about to pounce.

Heart racing, he was faster and before she closed her fangs onto his skin, he grabbed her and had a bite, satisfying his hunger.

He was now the Snake Eater…

This post was written for the Flash Fiction Rodeo Contest #6.

To enter the contest this week we had to do it in 2 steps. First, we had a couple of days to sign up to it. Then, a 2-word name of a bucking bull would be drawn for each contestant, which would then have another couple of days to come up with a 107-word 8-sentence history that included the 2 words of the bull’s name. And the theme was to be a fictional story about someone facing a challenge or a fear.

I liked the title of my bull and decided to keep the words together in the same order, so I created a story to go around it.

Their lord was captured by the priestesses of the Dark Sect.
She couldn’t let them have him. He was a good soul and needed to be saved.

She got her sword, mounted the mare and whistled for her companion dog.
In a minute they were flying through the woods, avoiding the branches and roots, trying to find the hidden shrine of the dark priestesses.

It wasn’t easy.
The woods were dark and very dense. Riding amongst its trees wasn’t a smooth ride.
Sometimes it also felt like they were going in circles. Maybe they were indeed.
And on top of it all, there was powerful dark magic protecting the shrine from being discovered.

But they needed keep trying.
His life was at risk and the villagers needed him.

She summoned her own Gods to help her on her quest. Hoping they’d help.

After two days riding, stopping only briefly to eat, and having had almost no sleep, the dog sniffed the air and started to bark and howl.
The mare panicked and wouldn’t go on.
She could also feel it. They were getting close.

She tethered the mare at a nearby tree and called the dog to come with her.

As they walked towards the force emanating from the trees, she became weak, her mind was going blank, but she was still struggling. She had to be strong to safe her lord.

After a few minutes of very hard walk, they came to clearing, where the priestesses were standing in a circle, with her lord tied up in the middle, subjugated, kneeling at the center, his head down.

She only had time to hear the spell before passing out herself.

Her lord was deceased… 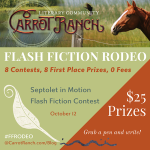 This post was written for the Flash Fiction Rodeo Contest #3, hosted by Carrot Ranch.

The challenge today was to write a piece of fiction of about 200-300 words, that included a septolet as a spell or a charm.

Initially I though only the septolet would be required and crated the one above naming is “Verborragic Avada Kedavra”. But it was only once the rules were posted, and I leaned it should be in the middle of a story, that I created the story around it to go with it.

“What’s that? Is it the alarm clock? In the middle of the afternoon? Why?”

“No, that’s not the alarm clock. That’s the phone.”

“The phone? But I thought phones vibrated and played some sort of music… What kind is it then? Not Android for sure… Oh I know! It must be Windows Phone! Windows Phones are so rare to find that maybe this is why I don’t recognize the ring…”

“No! It’s not a Windows Phone, nor an Android or iPhone or any of those. We’re at grandma’s, remember? She does not have a smart phone. It’s just an old land line phone.”

“Land line? Land? What do you mean? Why land? And where did she put it that I can hear it so loud?”

“Land line because the voice travels through a metal wire or optical fiber that is “landed”. Not cellular radio waves. But I guess she has the ring on max volume so she can hear it from other rooms. It stays fixed in the living room. By the sofa. Haven’t you ever noticed it?”

“No, the only thing I remember by the sofa is that antique calculator kind-a-thing, with the numbers on a dial but no display to show the result. I actually never understood how it worked though…”

“The phone???!!! But it does not look like one! There is not even a touch screen. Actually there’s no screen at all. How do we install apps on it? And how to get SMS?”

“We don’t, dummy! Old phones are only for speaking. Just voice calls. No apps, no internet, no images. Just voice.”

“Oh!… Really? So where does grandma makes her grocery lists then?… On no! Don’t tell me she uses PAPER!!!”

This post was written for the Flash Fiction Rodeo Contest #2.

The rules for this one are to try to be funny. The story needs to be 299 words long (give or take 9 words) and is supposed to “raise a grin, trigger a giggle, release a chuckle, generate a guffaw, give life to a groan”.

This one was the one I saw as the hardest, as I have a hard time being funny on purpose. Then the day before the challenge was posted, I was writing for a daily prompt and realized the text I had just created could fit this contest, so I refrained myself from publishing for the prompt so I could enter it here. Not sure if was funny enough, but I decided to give it a try anyways ;o)

The winner was announced yesterday on Carrot Ranch Blog and this week’s great prize went to Colleen Chesbro with “The Bus Stop”.

Congrats to Colleen and well done to all of the participants.

“How about with their proportional body, brown eyes and blond curly hair?”

This post was written for the Flash Fiction Rodeo Contest #1.

The rules for contest #1 was that we tried to go back in time to when we were 6 years old and remember what we wanted to be when we grew up. The size of the text should be of 100 words only.

To be honest, when I was little, I actually wanted to be a dressmaker, then later I switched to either tennis of volleyball player.

So no, I never really wanted to be an astronaut, but I had friends who did, so I used their ambition rather than mine, since it seemed cooler… ;o)

The results for the contest were published yesterday, and the winner was Hugh Roberts, with and awesome entry of a boy who wants to be Santa. See here the winner’s announcement post with his entry and some other picks.

Congrats Hugh! And well done everyone!