Back to this month’s One Four Challenge.

My intention when I took to picture was to focus mostly on the giant clam and also on the lavender-field-like coral.
But then, as I took the picture, a little red fish was passing by right on top of the clam, and sort of stole the scene, becoming one of the focus points of the image.

So today, I’m dedicating the edit to it, and highlighting the little guy even more by increasing the saturation and then isolating it as the only colored element in a black and white picture.

Here is this week’s edit. 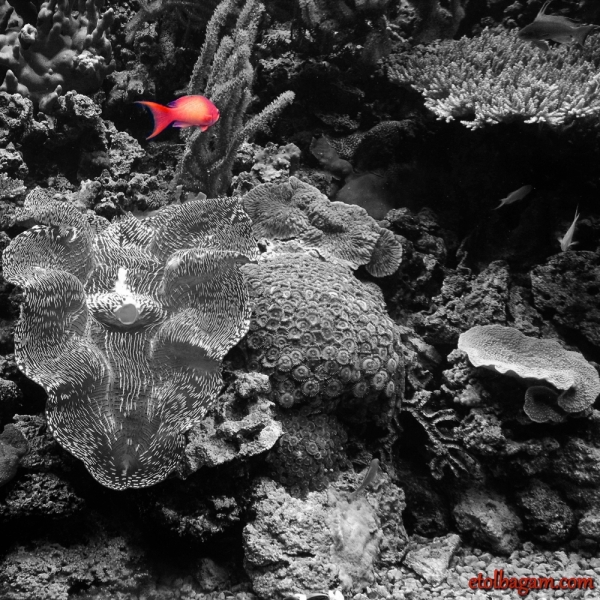 This post was written in response to the One Four Challenge 2016 – February, hosted by Robyn. Check also my week 1 edit here.

Robyn’s One Four Challenge is back this month!!!
And once again I decided to participate.

This year, with a few changes that happened on my job, I haven’t been able to find as much time for blogging than I did last year, so I’m getting far behind with writing challenges, but the photo ones are a bit easier for me.

So it made me very happy to see the challenge coming back.

For this month I picked a picture I took recently at the Seattle Aquarium, that showed the colors quite different from what I was seeing ‘in person’. I was with friends and a bunch of kids (mine and theirs), which means I didn’t have much time to try to troubleshoot off-color pictures taken with my phone (probably the best I’d be able to do would be trying different angles, but not even that… ).

So I got the picture that didn’t reflect the actual colors, and my goal this week will be to try to make it as closer to the real thing as I can with the tools I have. 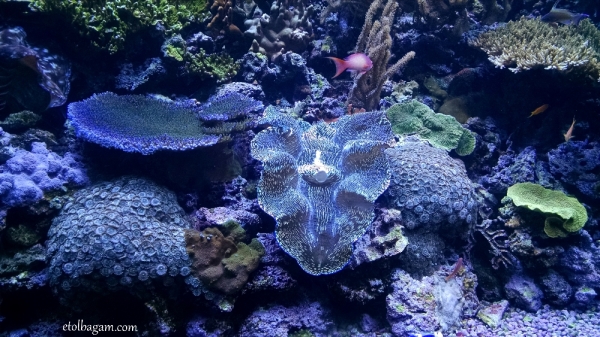 Some of the creatures/vegetation on this aquarium were orangey/browny, but in the picture, I got mostly blues. purples and greens. The picture also looks much darker than the real stuff, probably to balance the shininess of the big clam, that was exacerbated in the picture.

By changing the temperature of the picture and adding (just) a (little) bit more brightness, I was able to get some of the orangey tones back and got a much brighter picture.

I like the way it turned out.
I would need to go back to the aquarium to see how ‘authentic’ I was able to get, but from what I remember, I believe I got close.

This is my edit.

Week 1 – trying to get the real colors to show

This post was written in response to the One Four Challenge 2016 – February, hosted by Robyn