It is the morning of the rodeo. The horses are still calm.

Billy has no horse assigned to him yet.

He tries to look at each horse in the eyes. They don’t seem very fond of cowboys, bastards who tickles their flanks and don’t deserve to ride them.

Then Billy notices a young horse that seems more friendly. He’s also the most different looking one. All the horses are brown, this one is all white, with a pretty shiny hair. His name is Wishing Star.

They look at each other’s eyes and seem to connect somehow.

The horse is nervous now. At the time Wishing Star is released into the arena a little accident happens. The flank strap doesn’t get tight and the annoying ticklish sensation never comes. He relaxes but senses Billy tensing, with the possibility of being eliminated. He jumps and pounces and bucks as if being tickled, but making sure his new friend won’t fall.

Billy wins the big prize, and gets a friend for life. 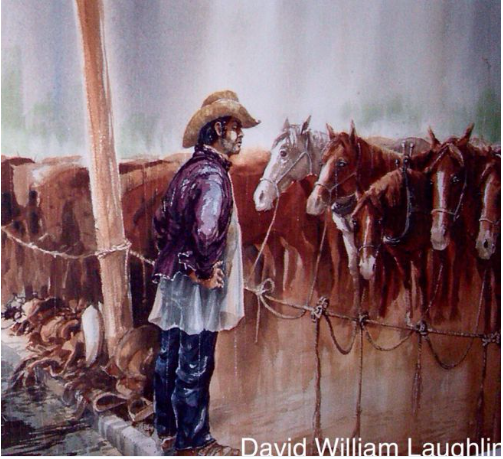 The story was inspired on the photo prompt provided by Scott, for the Flash Fiction for Aspiring Writers.

The first version of my story was based on the wrong belief that the poor horses get their privates tightened up for bucking. Then I did some research and found out this is not true. Some information about how the flank straps work can be found here.
I wasn’t sure if I should start all over with a different story, or just modify it. It would have made more sense if the private tightening was true, because horses would have a real reason to be unfriendly. But for lack of other ideas, I decided to just modify it.
If a new idea comes to my mind on the course of the week, I may give it a second chance and have another story written.

To see other stories, click the blue frog bellow.