She wasn’t really superstitious. Or maybe she was, just never admitted.

The kind of person that follows the Spanish saying “Yo no creo en Brujas, pero que las hay, las hay”. Like she didn’t believe in ghosts, but would not put her feet on a cemetery at night.

She graduated on Economic studies and worked for a financial institution.

She hated the job.

Her very first class was on a lab with a skeleton so they could study the human body’s bone system.

That skeleton reminded her of the image in the Death card of her grandma’s tarot deck.

She smiled. The death card means the end of a phase and subsequent rebirth. That was it! She was going to be a doctor!

This post was written in response to the Flash Fiction for Aspiring Writers, with photo prompt from pixabay, depicting a skeleton on a lab. 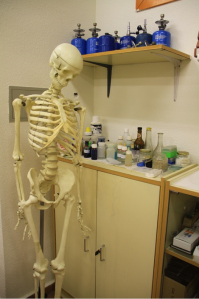 The tarot card image I use above is also a public domain image, taken from Wikipedia.

“Yo no creo en brujas, pero que las hay las hay”, translates as “I don’t believe in witches, but they do exist”. 😉