This week I dedicate my edit of the chose picture for February’s One Four challenge to the creature that made me take the picture in the first place. The shiny giant clam.

At first I didn’t realize it was a clam (I’m not at all versed in sea creatures) because I didn’t really see the shell. But it was so big, so shiny and so pretty that I decided to go for the picture. Then I posted one of the picture I took in instagram and  got a like on it from the aquarium. Visiting their instagram page was how I got to know what the creature was, as they also had a picture of it (with the blue cast! ;o).

Anyway, for this week, I again cropped the picture and changed brightness, contrast, and temperature to get to my final version, which looks like this:

This month, I must say the challenge was harder than I though it would be.
I picked the aquarium picture because of the fact that it was off color, but once I fixed that on week one, it was hard to decide what else to do with it.
Highlighting specific items on the original picture was fun, tough, although it made it feel like 4 different pictures, instead of 4 versions of the same one.
But maybe that’s the idea of the challenge anyways, right?

Editing the post to add a gallery with all the pictures for comparison, and a poll…

Week 1 – trying to get the real colors to show 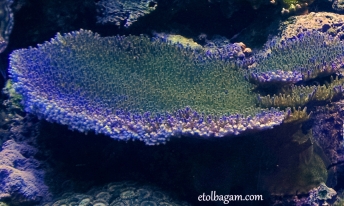 This post was written in response to the One Four Challenge 2016 – February, hosted by Robyn. Check also my weeks 1, 2 and 3 edits.